While working on the lids for the Zebrawood boxes yesterday, I also prepped some scrap pieces of Cherry and Poplar for the first of the “Lego” experiments.  While I had the planer up and running I milled the boards to a thickness of ¾ inch and then ripped each piece down to strips that were ¾ inch wide.
I was originally considering scaling these pieces using the true dimensions of a standard 2 X 8 Lego brick, however, as I scaled them up in size, the pieces would be wider than they were tall and that would be a waste of material for the ideas I’m tinkering with now.  So I landed on a size of ¾ inch wide X ¾ inch tall X 2 inches long.
After cutting the box lids to size I adjusted the stop block on the sled and started cutting “Legos.” 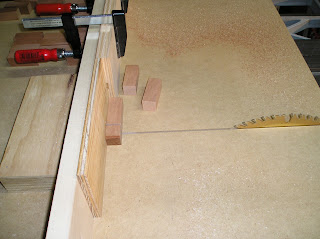 I was able to create quite a pile of Cherry and Poplar “Legos” from this scrap wood…giving them their second wind. The original towers that spawned this idea are long gone.  Remember, we live with Godzilla and he eats towers for breakfast.  I had to refer back to the photos I took and build another little mock-up out of real Legos. 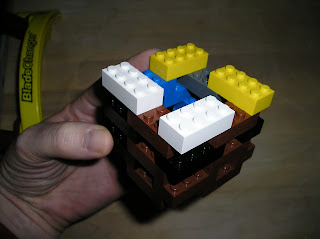 This first experiment, with Cherry blocks, is based on a pretty simple repeating pattern. 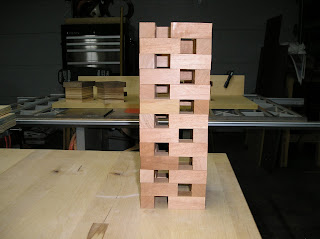 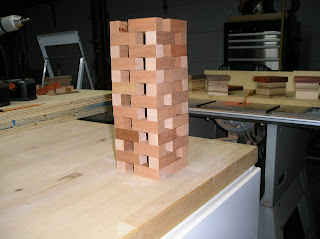 When it comes time to assemble and join the pieces to create a box, a light or a sculpture, I’ll want to identify a repeating grouping that I can build multiples of to avoid smaller errors in building block by block.  I first thought of using a two block configuration, but it would have required some tricky fitting when it came time to join the pieces of the structure.  After a little more time pondering I recognized this three block pattern that will allow me to assemble upward in a spiraling pattern.  I used blue tape to hold the blocks in place. 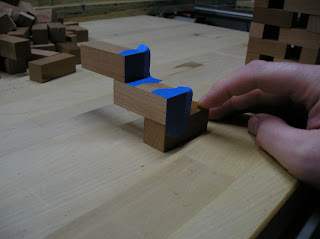 I then made a slight variation to this three block pattern to match my original Lego mock-up.  By shifting the position of just one of the blocks, the structure widens and there are new openings and “shelves” created in the surfaces. 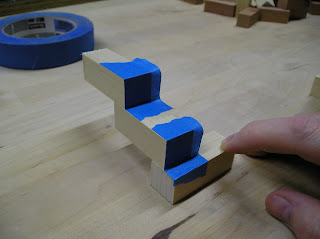 I used this modified pattern to build another structure, after Godzilla's bedtime, and I really like the effect it created.  There are so many more opportunities for variations in light and shadow.  I can see this making an interesting light, candle holder or lit sculpture. 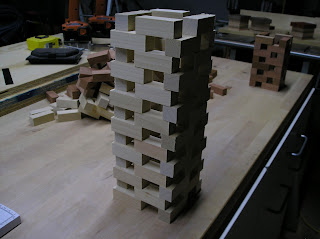 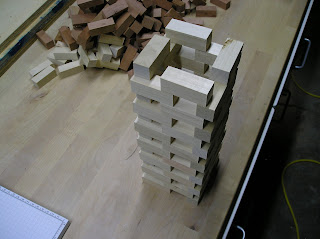 I can't say what I enjoy more...construction and destruction with Godzilla, or capturing some new inspiration that I can carry into my workshop.  It feels good to get my creative juices going and to experiment with my craft...of course roaring around the living room, breathing imaginary atomic fire and leveling cities of unsuspecting Lego citizens is pretty dang cool too.  I think I'm going to stick with both.